Research for The Northman

ON THE BURKA WARRIOR: 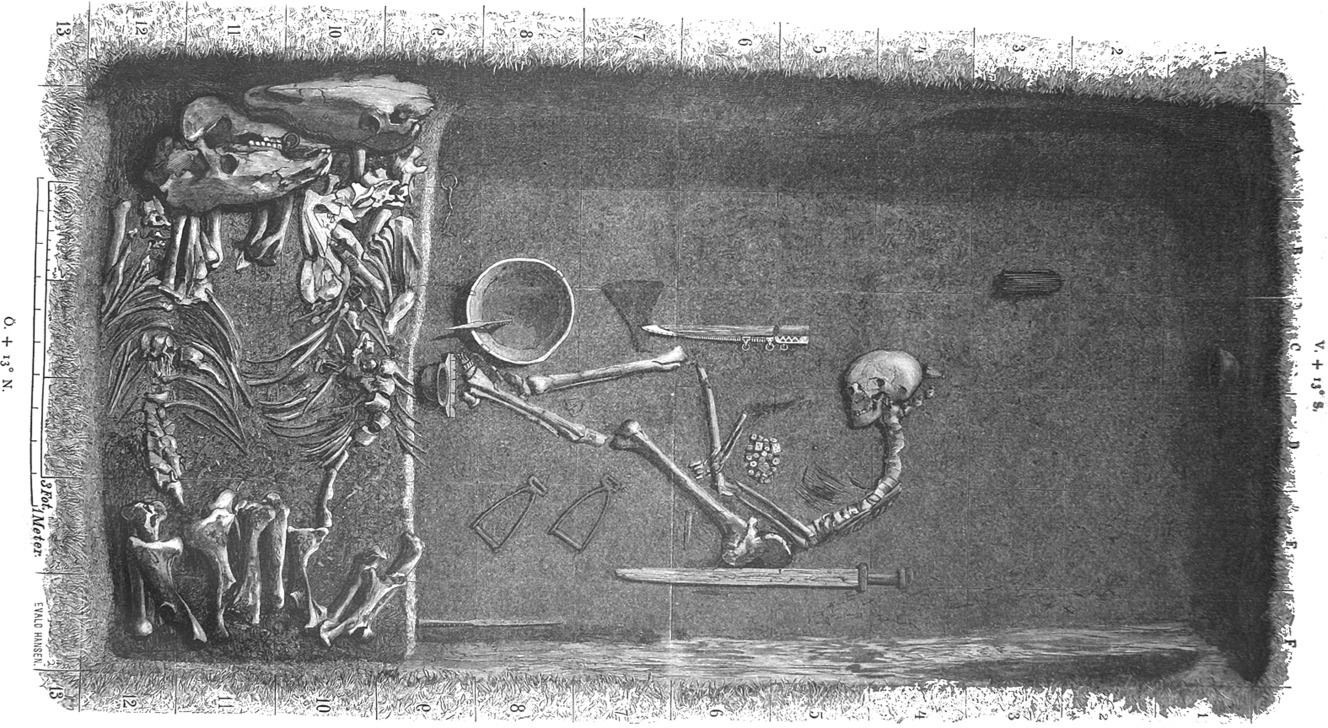 The concept of doing a writeup for what has been described as the most historically accurate Vikings movie ever is a bit daunting, but I’m just going to focus exclusively on swords and fighting and stuff like that rather than delving too deep into the physical culture of the film, which deserves an incredibly thick book written about it. I’ll also explain why Robert Eggers is a better filmmaker than Ari Aster because even though there is a buttload of historical research put into the physical culture, the purpose of why they’re in the film is pretty obvious and clear.

So within the first 15 minutes or so, Ethan Hawke of Boyhood fame is struck down by his dastardly brother Fjolnir. What is remarkable about the scene is the speed in which King Aurvandil is dispatched -- he’s shot by arrows, then speared by Fjolnir’s men who surround him and incapacitate him with their long spears. There’s no single combat, no chivalry -- they have a job to do and they’re doing it as quickly as possible. Even though everyone loves swords, especially the Vikings, this scene shows how the sword was not always the best weapon to have in your arsenal. Yes, it can cut pretty well like an axe (and this movie has wonderful axtion, if you will), and it can also be used to stab people effectively like a spear (as we see in one of the last shots of the film). But the sword is essentially a hybrid weapon that doesn’t cut as well as an ax or stab as well as a spear. Ethan Hawke gets the sword out but it’s far, far too late.

Then we have that wonderful shot of Fjolnir walking forward in his varafeldr cloak and taking off his mask. The armor is indicative of very high craftsmanship and rank- even though Fjolnir is the bastard brother of a king, he has very high status in the community. That shaggy cloak he wears is also indicative of status as well as being highly practical. Leather cracks very easily when wet , so the shag (furry side) could be worn outside to protect the leather and wool on the inside. Having a cloak of this kind would have identified Fjolnir as an important man; as would have the sword he wielded. 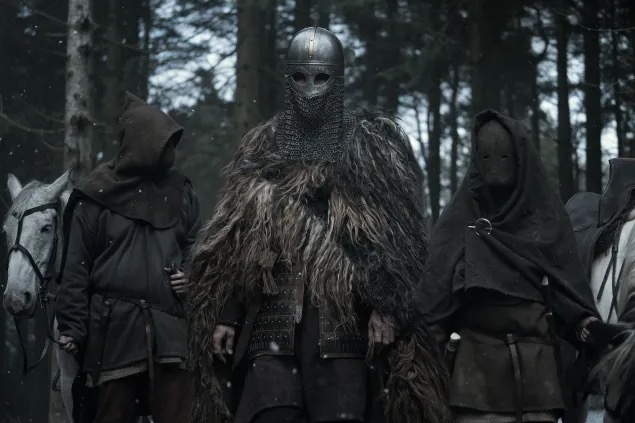 Fjolnir’s soldiers were armed with knives, shields and spears, whereas Fjolnir has that beautiful sword. Neil Price, the leading authority on the Viking Age and consultant on the film, has noted that everyone had spears -- they were cheap, easy to use, and deadly. Wielding a sword, though, is as much a badge of office in those days as it was a weapon, and Fjolnir doesn’t use it except to execute Aurvandil. Cutting off someone’s head is usually pretty difficult, and Fjolnir has to hit poor Aurvandil several times in order to get the job done.

This level of graphic violence is unusual in movies, in which fighting is either short and sharp (our hero cutting down dozens of faceless bad guys) or stupidly elongated (our hero and the villain fighting in a 45 minute duel). None of that here -- duels or single combats happened all the time, but that’s not what is being depicted. Its an assassination, not a fight, and the Viking age was full of messy betrayals. It's bloody, messy, work.

Then we come to the raid on the Slavic village. Now we talked this one to death on the pod, but let me just say that “barbarian” peoples throughout history fielded warriors who would fight naked or without armor -- the Celtic Gauls did it, the Germanic tribes fighting the Roman Republic and the later Empire did as well. The berserkers of the Viking Age were famous for their skill, and it remains unclear if they wore the skins of animals in battle or were bare-chested. In the Northman, they cover their bases and do both.

One of the things that drives HEMA types and sword nerds crazy is when people in movies hold swords underhanded, which Amleth does in the raid on the Slavic village. But according to Neil Price, this is a “fighting knife,” a smaller, slimmer blade that could be used for close combat. Many historians believe that smaller fighting knives like this would also be used in a shieldwall, given the extremely close-range and small fighting conditions. We didn’t get to see any shieldwalls in the Northman, mostly because they have a shieldwall like every ten minutes on the Vikings TV shows.

Another historical aspect brought vividly to life is the concept that physical objects have agency all on their own. For example, Amleth thanks the iron brand he uses to mark himself a slave: “I will thank your owner for the warmth.” It's humorous (he just burned himself) but also practical (Amleth needs to hide amongst the slaves in order exact his revenge).

But then we come to the special sword of the Mound Dweller. First, it is a magical sword with a name, Draugr, meaning literally “Undead,” and that it can only be drawn at night or at the Gates of Hell. We see one of Fjolnir’s asshats try to pull it out during and it doesn't work. Here too is the agency of physical objects, they have their own requirements, and can only be used in special ways. Neil Price also comments that the concept of a named weapon was always popular in the Norse legends and the Sagas. Having a named weapon with a long history would have imbued its bearer with prestige and honor. 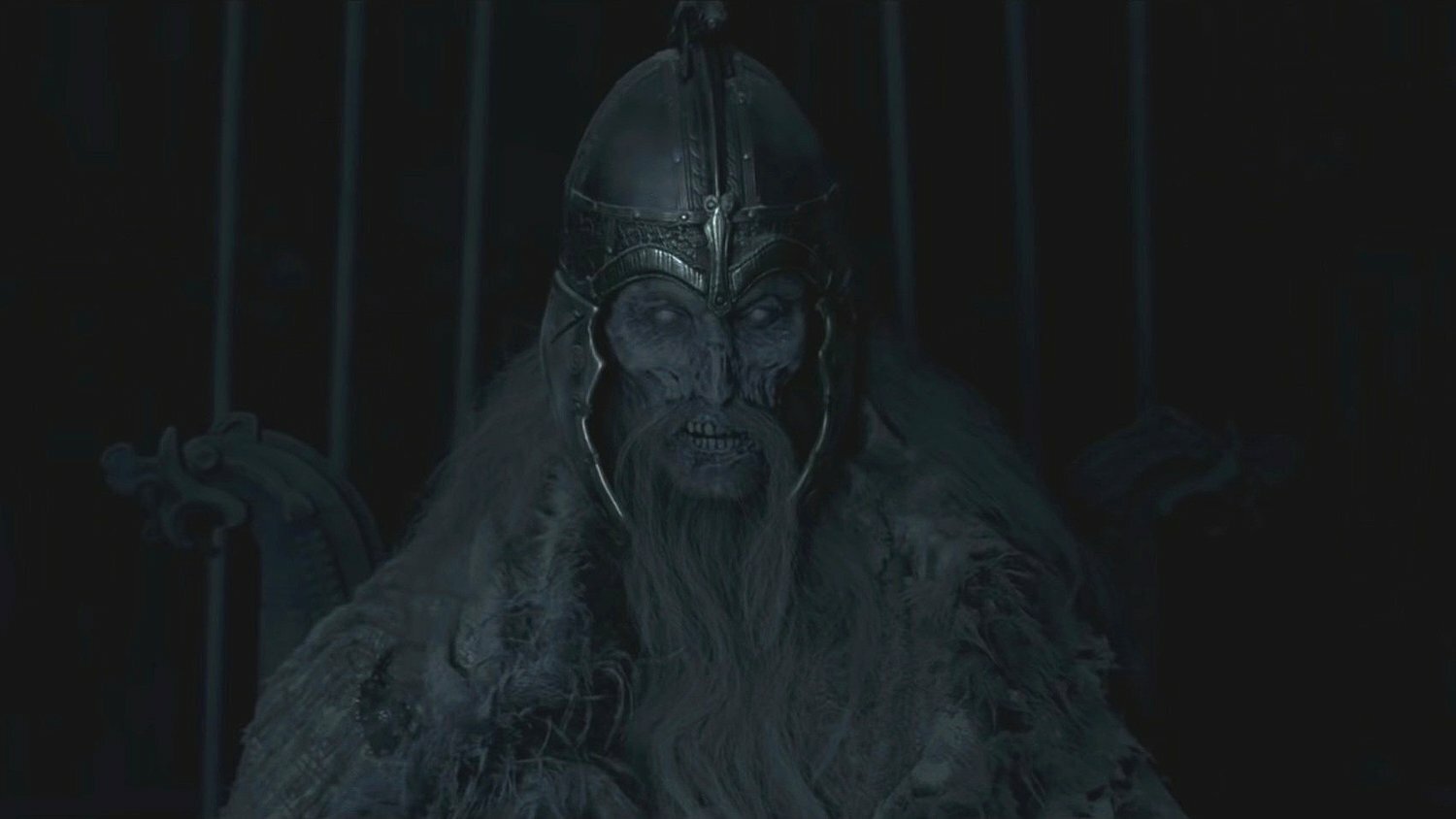 The Mound-Dweller, himself a draugr now (or was he?) is also painstakingly rendered, as he was also at one time a famous hero. The helmet he wears is similar to equipment from centuries prior (compare it with the famous Sutton Hoo helmet without the faceplate). He’s also buried with a massive burial ship, a practice which appears later in the film, all artifacts indicating that this guy in his own time may have been a lot like Amleth himself. I could probably go on and on but lets get down to the awesomeness - the holmgang, the final fight between Fjonir and Amleth. As pointed out on the podcast, this is a ritual for settling disputes, and need not have been fought naked but hey, why wouldn’t you?

The fight itself is very well done because while there is plenty of hack-and-slash going on with the swords, it's when both men are so exhausted and injured that they literally can’t do anything else. These two guys are expert in sword-and-shield fighting, and there are all kinds of little tricks where Amleth and Fjolnir are trying to get the other guy off balance, or trapping the blade with the shield (like in sword-and-buckler), and going back between cuts and thrusts -- whatever will end the fight. But more important than that is the use of space. A guy with a sword in his hand can kill somebody about two and half feet in front of him, given the length of his own arm and the length of his blade. You have to be very close to your opponent in order to get the job done - and Amleth and Fjolnir are very, very close to each other. One of my favorite little things was when Fjolnir jumps into a guard with his sword on top of his shield, daring Amleth to rush him. Not being stupid, Amleth doesn’t and the fight goes on. This is such a nice little detail because it shows that Fjolnir thinks a trick like that will work, and Amleth doesn’t take the bait. A few seconds later, I think Amleth gets a cut on Fjolnir on his left leg but who knows.

And then we come to that final exchange where the two dudes are just shouting at each other and trying to psych themselves up while psyching out the other guy, and we get that final mutually assured destruction, with Fjolnir stabbing Amleth through the heart and Amleth cutting off Fjolnir’s head.

But even here there is important information. Amleth is avenging the death of his father, whom Fjolnir decapitated, and Amleth decapitates him - but in one stroke! Perhaps this means that Amleth is simply stronger than Fjolnir (maybe) or perhaps is sword is more magical and special, or that Amleth’s cause is more worthy -- I happen to think it may just be all three.