SURPLUS ORDNANCE Episode 39: The Bridge on the River Kwai

The movie is entirely fictional, so I’ll mostly comment on the environment. surrounding it all.

Some Japanese military officers actually took this to heart. After the war ended, some officers did not surrender and return to Japan. Instead they worked as military advisers to native independence movements such as the Viet Minh movement in French Vietnam.

With the fall of France, Japan used its position as a member of the Axis to take over French Indochina - Vietnam, Laos, and Cambodia and incorporate them into the “Greater East Asian Co-Prosperity Sphere.”

Thailand is the only nation in the region that was not colonized. The Thai Kingdom had been able to maintain its independence. At the time of WW2, however, Thailand was ruled by a fascist dictatorship that sought friendly relations with Japan.

Next to Thailand was Burma, modern day Myanmar. Burma was a British colony at this time. The Burmese independence movement invited the Japanese in and cooperated with the Japanese as an attempt to push the British colonial masters out.

The British were using Burma as a path to supply the Kuomintang (KMT) - the nationalist Chinese controlled by Chiang Kai-shek - in their war with Japan. They moved supplies to China over the Burma Road and via an air route called “The Hump”. Burma bordered British India.

In order to cut off the flow of supplies to China, Japan wanted to invade Burma and eventually India. India was way too big for Japan to consider conquering, but Japan wanted to create the conditions in India for the Indians to revolt against Britain. India had already been seeking independence, which the British hoped to delay until after the war.

French Indochina, particularly the Mekong River Delta, is one of the most productive areas in the world for rice production. If rice could be moved from French Indochina to Burma, it could support the army that was needed to eliminate the British from Burma and touch off a violent anti-colonial movement in India. To move this rice, the Japanese decided to build the Thailand Burma railway to connect Bangkok, Thailand and Rangoon, Burma.

The railway was built by about 61,000 western POWs and about 180,000 locally impressed laborers. The largest group of POWs were from the 85,000 soldiers of Lt. Gen Percival’s British Garrison at Singapore in early 1942. Of the 85,000 soldiers at Singapore, about 40,000 were Indians who were allowed to enlist in the Japanese allied “Indian National Army”. They would fight alongside the Japanese against the British.

In addition to the British and Australian soldiers from the Singapore garrison, there were British, Australian, and Dutch soldiers that were captured when the Japanese took the Dutch East Indies. About 30,000 British, 18,000 Dutch, and 13,000 Australians formed the POW workers. They suffered a 20% death rate, more than 12,000. The conditions depicted in the movie actually understated the horrific living conditions.

The Japanese initially tried to recruit workers with promises of high pay. But they turned to impressment. Conditions were equally harsh for impressed laborers. Some documents suggest 100,000 Malayan Tamils were brought into the project and around 60,000 perished. Approximately 90,000 Burmese and 75,000 Malayans worked on the railroad. It is estimated that as many as 50% of these workers perished.

The jungle is a difficult place to live and work; disease is always a problem. For comparison the Japanese guards suffered an 8% death rate.

The “Bridge on the River Kwai” actually crossed the Mae Klong River. The Khwae Noi River is nearby, and Khwae gets confused for Kwai by non-Thai speakers. In 1960 the portion of the Mae Klong near the railroad crossing was renamed Khwae Yai to better align with the fictional book and movie.

The Japanese did reach India. On 8 March 1944 the Battle of Imphal began. It was an attack on the Northeast Indian city of the same name in the state of Manipur, part of the Japanese “U Go offensive”. The Japanese did not think that the British could have any heavy weapons in the mountainous terrain, and so left their own artillery behind. The combined force of British, Indian, and Gurkha units successfully held the defensive line then counterattacked with light tanks. Without artillery the Japanese could not counter the tanks. The battle officially ended 3 July 1944.

Perhaps the chief reason the offensive failed is that the Japanese did not have the ability to feed their troops effectively so far from Rangoon. They had insufficient transports to move enough food to the front, and so the Japanese Army finally collapsed from hunger.

Eric, an officer in communications was part of the British Army that surrendered to Japan at Singapore
February 1942. He was liberated after spending 3 years in captivity. His is not the only story to come out of the war
about captivity and torture but his writing about his experience is especially pointed. Initially, he was sent to a camp at
Kanchaburi, Thailand where he was employed by the Japanese in the rail repair shops. During his time there he was
part of a group that made a radio shortwave receiver that was used to listen to Radio India to gather news from a source
that wasn’t propaganda from the Japanese. The information was spread far and wide within the POWs in Burma and
Thailand working on the railroad. Later he discovered several other radios were secretly constructed but the Japanese
discovered most of them. This radio proved to be his downfall. When the radio was discovered and he was implicated
in it he was arrested by the Kempeitai, tortured, tried for anti-Japanese activities and imprisoned in Outram Road Prison
in Singapore along with four others involved in the effort. He merged extremely ill and malnourished (he lost 60#) The
privations suffered by these POWs was profound and stayed with him for the rest of his life. Later, around 1986, he met
one of his torturers, Takashi Nagase in Thailand and reconciled with him. The meeting was part of a documentary,
Enemy, My Friend? (1995) He devoted himself to helping other victims during his life. He was one of the first patients
at the Medical Foundation for the Care of Victims of Torture in the 1980s. We know the condition now as PTSD.
Something that stuck me was the resilience of these people in captivity. While they died by the thousands,
mostly of starvation, they never gave up, partly owing to the news that came to them via the jungle telegraph. And they
supported each other to the extent possible.
After the war the UK, Austrailian and New Zealand governments made a concerted effort to find as many
bodies as possible and identify them. That involved a team of soldiers and a couple Japanese going along the whole 260
mile plus railway. Some 10,000 POWs were found.
Another thing that struck me was the complicity of the Government of Siam (now Thailand) in all this.
Lomax was jailed by the Kempeitai for months in Bangkok. The railway started in Siam. All the supplies Japan wanted
to ship would have gone through Siam. The Siamese government made a deal before the war to collaborate in exchange for avoiding occupation.

The following pictures are of the cemetery, museum, and bridge at Kanchanaburi. We toured Thailand in 2009. 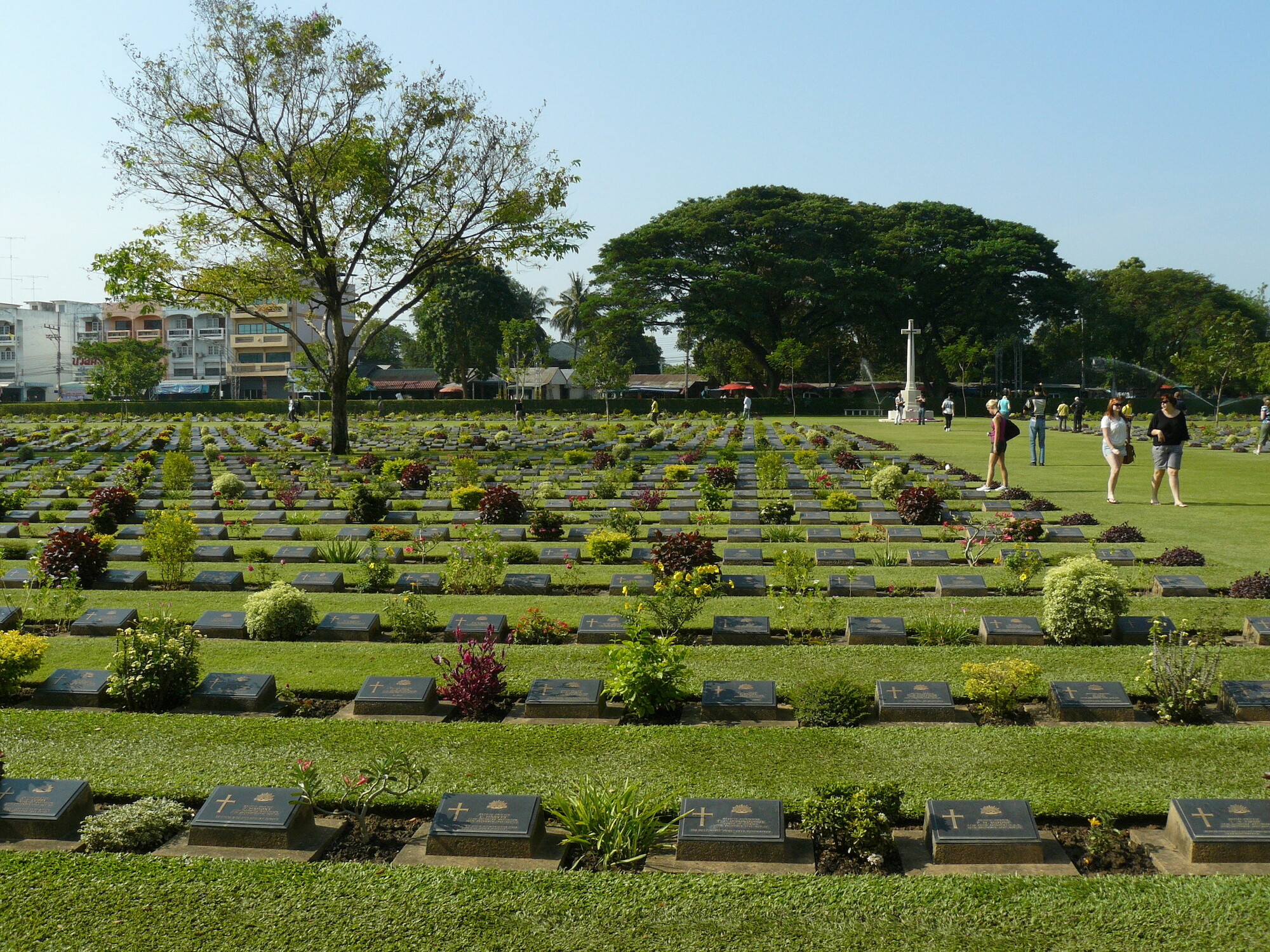 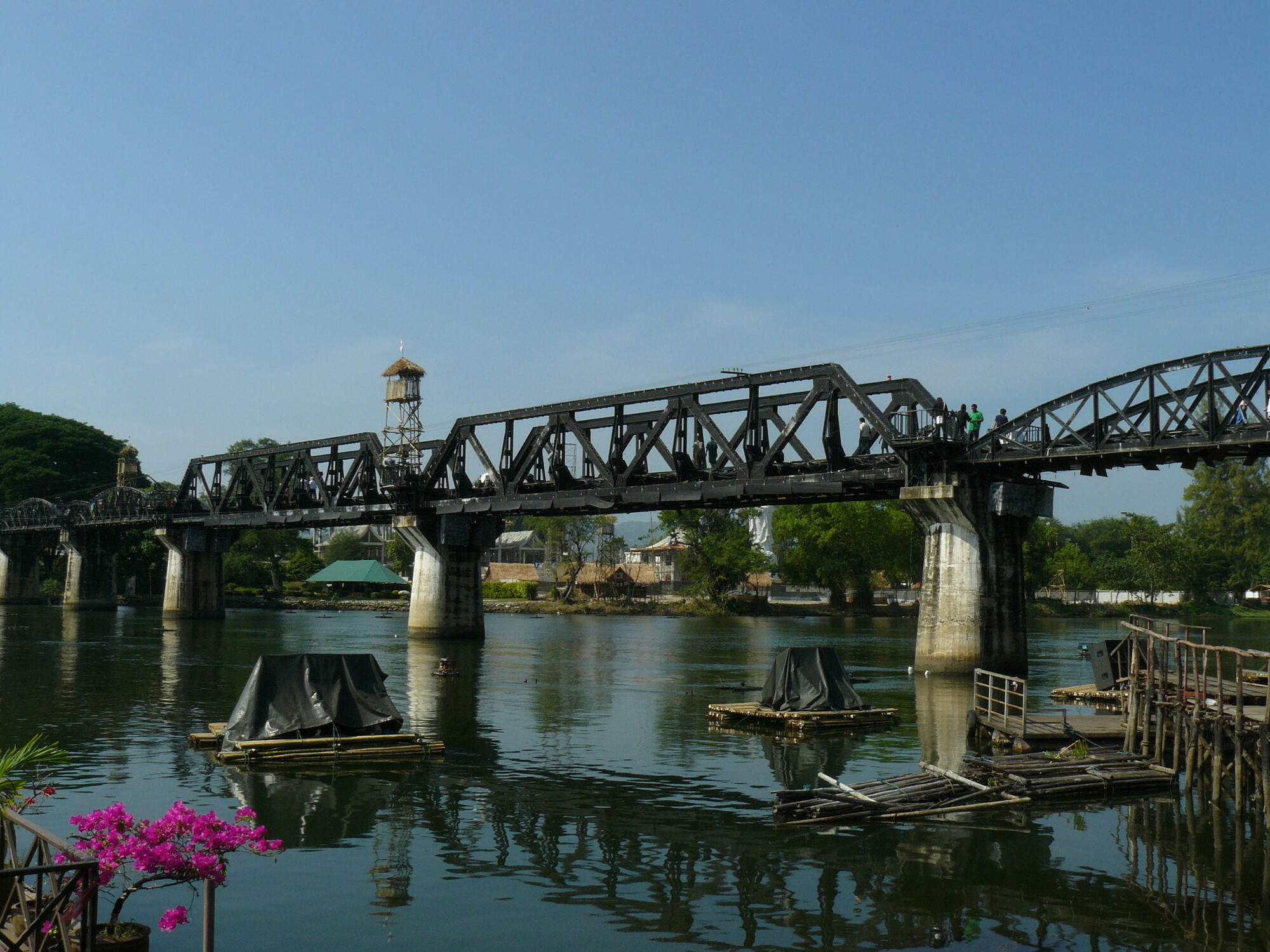