Throne of Blood takes place in the 16th century during a period of time known as the Sengoku period, "the Warring States period" (1467 to 1614). Akira Kurosawa made several films during this lawless period, when central authority broke down throughout Japan, and warlords (daimyo) fought one another for decades. The Emperor of Japan resided in Kyoto during the period, and the shogun and his daimyo all swore loyalty to him, being a living god. However, influence with the shogun, royal court, individual clan politics, or local matters on trade or resource led the daimyo to war with one another or the shogun himself.

Kurosawa chose this period (warlords attacking one another, destroying fortresses, betraying and murdering allies only to be betrayed and murdered in turn) because he felt that it was the most similar to Macbeth’s medieval Scotland (which also was a pretty rough place to live).

The sets were built with the assistance of US Marines, stationed near Mount Fuji

Historians describe the period as almost constant civil war, while also being a period of increased economic activity as trade with China and the West increased, technology was shared more openly, and concepts like cash transactions and even Catholicism were introduced to Japan (the latter before being kicked out of the country in 1614 by the Tokugawa shogunate ).
According to the Criterion Collection’s analysis of Throne of Blood: “Kurosawa concentrates on the epoch’s military strife, and his presentations of those conflicts are so apocalyptic as to imply that widespread killing was taking place in Japan’s medieval era. In fact, the rate of battlefield death in the samurai wars was not so extensive. Kurosawa gives us battles filtered through his perceptions as a twentieth-century artist well acquainted with the truly large-scale slaughters of his own time. The sense of apocalypse in the films is not of the sixteenth century but contemporary.”
Therefore, the widespread destruction depicted in Throne of Blood is a comment not on the depredations of daimyo and shogun during the Warring States period, but a comment on 20th century warfare.
The opening scene with Toshiro Mifune and Akira Kubo riding in the forest is interesting. Samurai were initially heavily armed cavalry, with a special emphasis on archery.
Samurai actually had a duel where on horseback they would fire only three arrows to settle matters
Some early samurai would not wear armor on their right arm in order to pull the drawstring of their bow
Western fanboys obsess constantly about the seeming “magical” hardness of Japanese katana and shoto, the two swords that Samurai were entitled to wear by law, but Japanese traditions and records appear to indicate that high skill at mounted archery was the “primary battle skill for elite warriors for some 750 years.”
Here is where I would normally talk about the complex nature of the katana itself, with its extremely hard edge and flexible body made of two separate pieces of steel (light and flexible but also extremely hard) but we don’t need to fanboy out about swords. Here’s a picture from wikipedia Here’s one from Samurai Champloo that has nothing to so with Throne of Blood but so fuckin cool.

The decorations of leading nobles with horns or other artistic embellishments are accurate to the period. The following are taken from the Wikipedia page Japanese Armor. Noh drama is on display in Throne of Blood. What is interesting is that Noh is traditionally thought to have developed during the Warring States period dramatized in Throne of Blood.
Noh drama is highly stylized, regulated, and deliberate in its movements, gestures, facial expressions, music, dance, and other elements, to convey very specific concepts. These are specifically denoted in the Iemoto for Noh, and are as rigidly performed and traditionally-followed as Japanese calligraphy, tea ceremonies, and martial arts.
It’s a big deal in Throne of Blood according to Criterion: “Noh elements include the music (that assertive flute, for example), the bare sets, and especially the stylized performances by Mifune and Isuzu Yamada (as Asaji).”
The chant that begins the film (as the ruins of the castle are made evident) is a common element in Noh drama.
Noh typically involves humans dealing with a supernatural spirit of one kind or another.
Noh drama typically does not use complex characterization, instead using archetypes to tell a story with a specific lesson to be learned.
No masks are used but facial expressions and makeup, particularly with Lady Asaji.
The barrenness of the sets and locations, the stylized movements of the actors, and the construction of the shots all add to the sense that the audience is watching a traditional noh drama 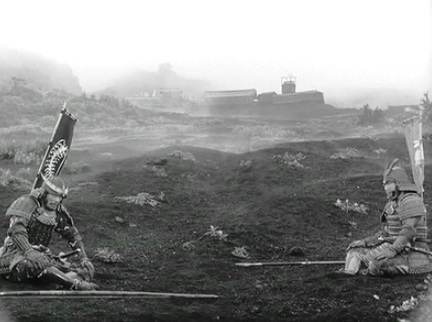